Desert Oasis for All Seasons:The Best Kept Secret is OUT 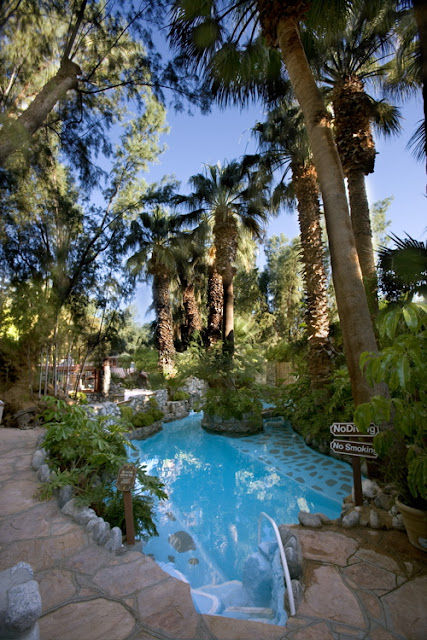 It’s the launch of Summer and everyone is heading for the cool pool or beach. While everyone is complaining about the extreme heat across the country, sometimes “hot” can be a good thing. Especially when you live in Los Angeles. While everyone is headed for the beach, you can go in the opposite direction and head for the desert. According to the latest Tom Tom Traffic Congestion report, “Los Angeles is the most congested city in North America. On average, journey times there take 33 percent longer than when traffic in the city is flowing freely and 77 percent longer during evening rush hour. Rounding out the top 10 most congested cities are Vancouver, Miami, Seattle, Tampa, Fla., San Francisco, Washington, Houston, Toronto and Ottawa.”

No wonder you want to flee the maddening crowds, including the hoards of foreign tourists dashing to the US for cheap deals on everything from hotels to haute fashion brands. Shopping in the US outlet stores these days is like Hong Kong in the 60‘s. Many of you are savvy to escape from LA by going against the traffic. Here’s a great escape with very few hoards to crash into: Two Bunch Palms Resort and Spa in Desert Hots Springs. While everyone is running to the night life and excitement in Vegas, you can be floating in a lagoon filled with the top rated mineral springs in the world! 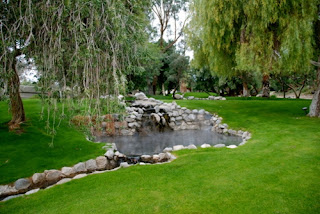 In the desolate town of Desert Hot Springs, the rich and famous have retreated to a secret getaway for decades. Two Bunch Palms, a beautiful oasis, is an historical landmark setting for total relaxation, especially for Hollywood Honcho types. In fact, it was literally the clandestine hideaway for the infamous "gangsta" Al Capone. This desperado built the original stone fortress as his notorious hideout and exotic playground on a sacred Indian site. The most precious commodity, the mineral rich, high lithium content  healing waters, is surrounded by "two bunches of palms", a.k.a Two Bunch Palms. The healing waters induce a soporific effect that calmed the nerves of the most hardened 'outlaw'. Before it was fashionable to be a modern spa, this was the most sought after place to chill out and 'do nothing' except obtain the priceless benefit of the healing waters. Everyone would flock to this steaming hot pool lagoon, in the middle of nowhere, to rejuvenate like nowhere else on earth. 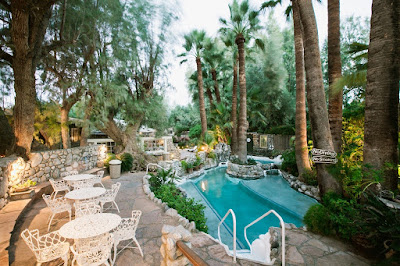 Without the slick trademarks of many new imitators, the signature treatments remain exceptional, such as the rich mineral mud baths, created from the unusual green clay. This vein of green clay was found next to the artesian well on Miracle Hill, and has been tested by biochemists at NASA's Aces Research Center. The 'Hydra-Terra" qualities have been found to store energy and to catalyze reactions, helping to restore the natural skin tone and balance, absorb toxins and create a rejuvenating effect on the skin. This clay is infused with the natural spring waters, and soaked for millenniums in high heat. Subsequent tests reveal rich mineral content in the natural spring's lagoon, especially high in lithium, which has a very soothing and magical effect on the nervous system. 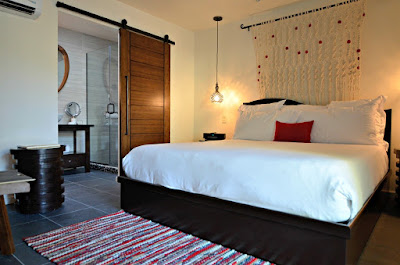 If you don’t mind driving, the spa treatments are some of the best in the world, and worth the effort. Forget about the fancy-schmancy hotels with fine crystal chandeliers to assuage the corporate clients, wrapped up in a fake spa atmosphere, promising to help you de-stress.

Try the Watsu, a water therapy treatment in private pool that will send you into oblivion and set the tone for the rest of your stay. And don’t forget the Epicuren Facials-there are only a few spas left that use these products-the absolute best! In addition they are leading the trend for utlizing the Himalayan Salt crystals which are known for their exceptional healing qualities. Getting a massage with the smooth heated stones aligned on your chakras is beyond exceptional for quelling the nerves and letting go of the city vibes.

Most of the action takes place around the Grotto, day and night. The landscape also boasts a picture perfect pond with friendly fish and turtles who will chase after you so you better buy some fish food in the office! This is truly a romantic place, especially at night, with star gazing and incredible sunsets and moon risings. Forget leaving the property, there is no place better to experience nature and peace, you are privy to this incredible lush vegetation and subtle lighting. This is one of the most special places on earth. Many say it is located on an energy vortex. 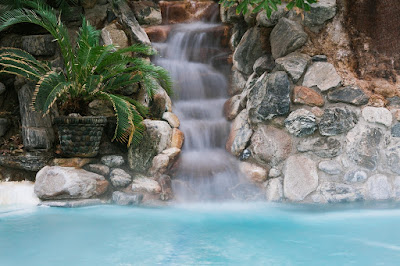 The latest upgrades have really catapulted this resort into a leading edge twenty-first century destination. The resort has positioned itself as a e a leader in sustainability within the wellness-resort industry.

It’s two palms up for Two Bunch Palms when it comes to relaxation and shedding your suit of armor so you can have a total mind/body/spirit makeover.

“Sustainability basically calls for us to use protocols and practices that manage our natural resources and human capital responsibly in order to be efficient, do no harm and preserve those resources and quality of life for future generations.” Under new ownership, their savvy business acumen are at the forefront of  the hospitality industry. Not only have they upgraded the design of all rooms and suites, but the restaurant is au courant in decor as well as farm to table fresh fare.

“From better potable water conservation practices for irrigation, non-toxic and more natural cleaning and treatment products, recycling throughout the property, sell more sustainable retail goods, renovating our rooms with energy efficient windows, doors and hot water heaters or generate our electricity from 100% renewal sources, the company strives to meet its sustainable goals and be an inspiring thought-leader and example in the marketplace.”

The most outstanding advancement is the construction of their solar field. They are taking a stand for not only personal wellness but planetary health at large. They mean business in their attempts to honor the environment by  establishing a partnership with Pear Energy, by building a 3.5-acre solar field. This revolutionary gesture actually generates “the equivalent of 100% of its electrical power needs through renewable energy, making it the first resort of its kind in North America. In addition, it will save over 13 million pounds of carbon emissions and 375 million gallons of water over 21 years, thereby reinforcing our ethos about individual vs planetary health.”

Without question, their efforts will pay off not only for the resort but as a leader amongst the future of the wellness industry. No wonder they were awarded Corporate Brand Dedicated to Sustainability by the Green Spa Network 2015 Awards.

FYI-Many reality based television shows have been rediscovering the natural beauty of the resort. You may have caught a glimpse of some of the most picturesque spots on the "Bachelor" or "Average Joe", or "VH1", and even "MTV Dismissed". The most notable movie, The Player,features his exclusive Hollywood Hangout as a focal point of the film! This natural environmental treasure can be experienced by just making a reservation. 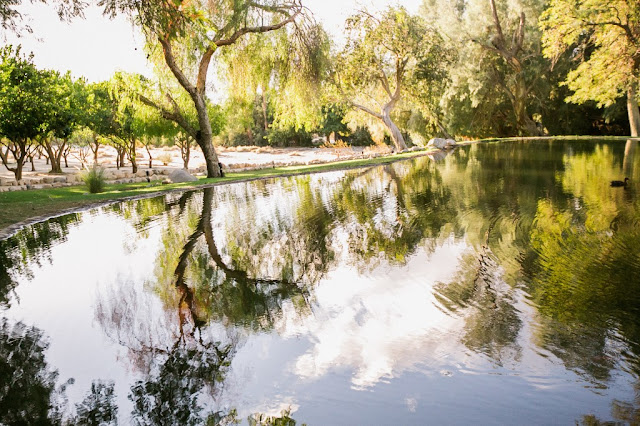 Don't forget to feed the friendly ducks, turtles and fish who will greet you at the peaceful lake.
They may not let you pass by without reminding you that they expect to get a treat! 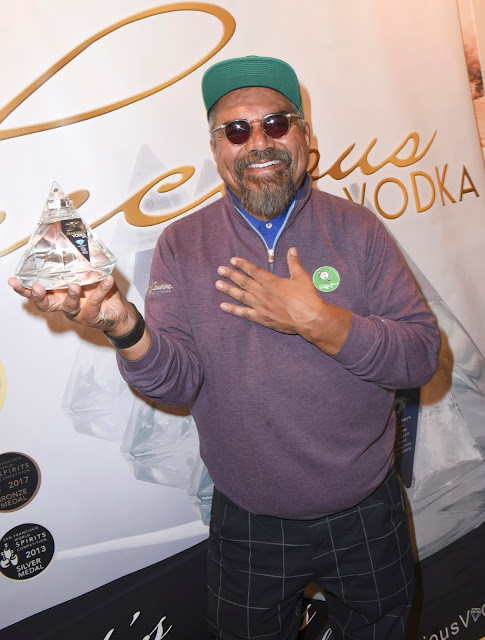 GEORGE LOPEZ SMILING FROM EAR TO EAR, WITH TITLE SPONSOR PRECIOUS VODKA
George Lopez Gives Back with a Hole in One at the second annual Gratitude Lounge hosted by the Gifting Diva herself, Doris Bergman, and scored a great turnout. It was a real hit for all, and a winner for the George Lopez Foundation.

ANTHONY ANDERSON WITH SPONSOR BACKYARD MARY
On Monday, May 7, 2018, the annual Celeb Golf Event was held at a hush hush country club in the heart of Movie Land, California.  All proceeds benefit the George Lopez Foundation.
The tee off at The 11th Annual George Lopez Celebrity Golf Classic, is always a hit at the most prestigious golf club. The sold-out tournament, benefiting The George Lopez Foundation, included Doris Bergman’s Second Annual “Gratitude Lounge”


PINK COCONUT WATER WAS THE MOST REFRESHING WITH NUTRIVISTA
Gifting Diva Bergman is the best at gathering up the luxury gifts for the VIP’s. From limited edition CURTIS & Co. Timepieces. especially designed for the event … 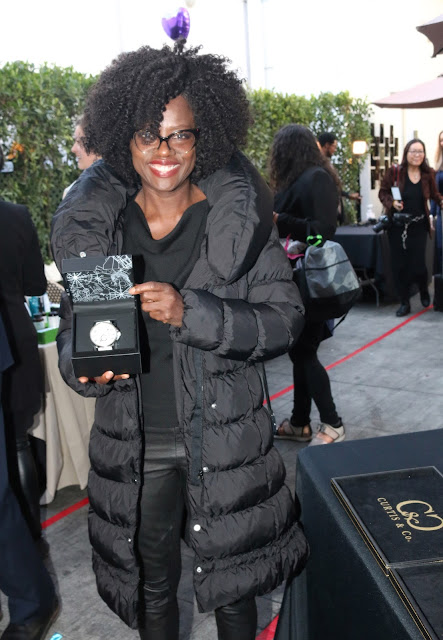 It’s that time of year again, and the pre-Academy Awards festivities are off and running. The Oscar’s got a head start with Doris Bergman’s 10th Anniversary Oscar® Style Lounge and Party held on February 24, 2018 at Fig & Olive on Melrose Place. 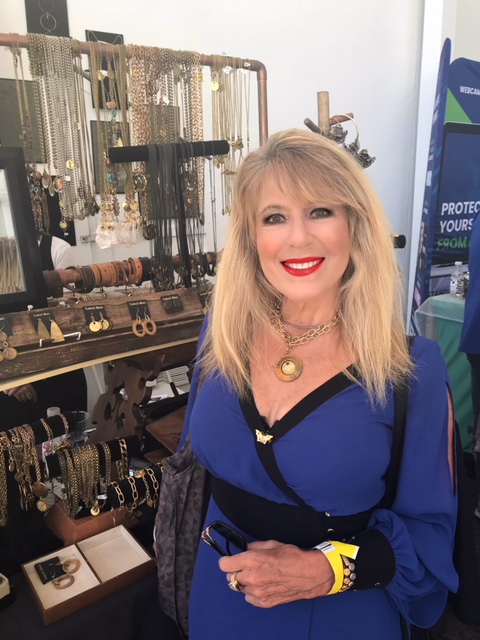